Jobyna Howland (1880 – 1936). American stage and screen actress.
She started as one of several models for Charles Dana Gibson's famous sketches of Gibson Girls. Howland made her first appearance on the New York Stage in 1899 managed by Daniel Frohman. During her long theatrical career, she apprenticed everything from drawing room farces to musical comedies always seeming to play the other woman, a best friend's pal or a distant cousin.
She appeared in a few silent pictures, but this medium did not seem to suit her booming, direct and distinct voice. In sound films, she typically played the kind of roles she had mastered on the stage, the domineering but dependable support. Her appearances in the comedies of Bert Wheeler & Robert Woolsey are some of her best known.

- "Six feet tall and blessed with Titian red hair, Jobyna Howland was one of the most striking of the stage beauties to appear at the end of the 19th century."  https://broadway.cas.sc.edu/content/jobyna-howland 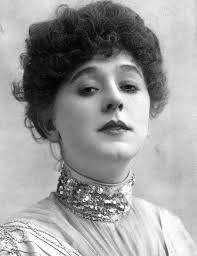