Antoine-Laurent de Lavoisier (1743 - 1794). French nobleman and chemist who was central to the 18th-century chemical revolution and who had a large influence on both the history of chemistry and the history of biology. He is widely considered in popular literature as the "father of modern chemistry".
Lavoisier is most noted for his discovery of the role oxygen plays in combustion. He recognized and named oxygen (1778) and hydrogen (1783), and opposed the phlogiston theory. Lavoisier helped construct the metric system, wrote the first extensive list of elements, and helped to reform chemical nomenclature. He predicted the existence of silicon (1787) and was also the first to establish that sulfur was an element (1777) rather than a compound. He discovered that, although matter may change its form or shape, its mass always remains the same.
Lavoisier was a powerful member of a number of aristocratic councils, and an administrator of the Ferme générale. The Ferme générale was one of the most hated components of the Ancien Régime because of the profits it took at the expense of the state, the secrecy of the terms of its contracts, and the violence of its armed agents. All of these political and economic activities enabled him to fund his scientific research. At the height of the French Revolution, he was charged with tax fraud and selling adulterated tobacco, and was guillotined.

- "Red-haired Lavoisier was young and handsome."https://books.google.it/books… 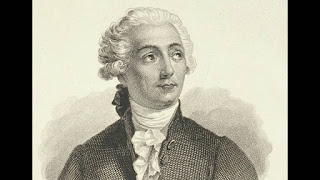