Amelia Jenks Bloomer (1818 – 1894). American women's rights and temperance advocate. Even though she did not create the women's clothing reform style known as bloomers, her name became associated with it because of her early and strong advocacy. In her work with The Lily, she became the first woman to own, operate and edit a newspaper for women.

- "Although her red hair gave her the nickname of Rusty, Bloomer was by no means fiery in temperament."  https://books.google.it/books…

- "She was a petite, dainty woman of five feet four, weighing only a hundred pounds, with bold blue eyes and dark red hair..."  https://books.google.it/books…

- "She was short with a petite figure, dark blue eyes, and auburn hair." https://ir.uiowa.edu/cgi/viewcontent.cgi…

- "She had a well-formed head, bright, blue eyes bordering on black, auburn hair and an exceedingly pleasant and winning smile."  https://archive.org/…/li…/lifeandwritingso028876mbp_djvu.txt 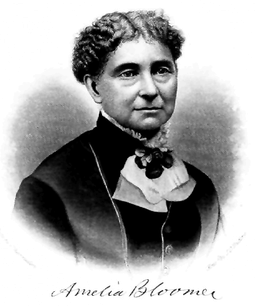