Rusty Dow (born Benzie Ola Scott,1894 - 1989). American truck driver.
She married Russell W. Dow in December 1939, and moved with him to Anchorage. During World War II, Rusty Dow was a driver for the Quartermaster Corps, Colonel Benjamin Talley of the Army Engineers Area Office, and General Simon Buckner, all at Fort Richardson. In 1944, she became the first woman to drive the Alaska Military Highway from Fairbanks to Dawson Creek in the Yukon Territory and return with a load of cargo. She was also the first woman to drive through the Anton Anderson Memorial Tunnel (Whittier Tunnel) in November 1942.

- "Rusty Dow started her life as Benzie Ola Scott but was quickly nicknamed Rusty because of her auburn hair."  http://www.jruble.com/industry-news.aspx…

- "But according to one account, “only Rusty, with the kindly blue eyes and the unruly red hair and the khaki coveralls, drives an engineer mail truck through the ruts and roads and forts of Alaska.”  https://www.usace.army.mil/…/Women…/082-Female-Truck-Driver/ 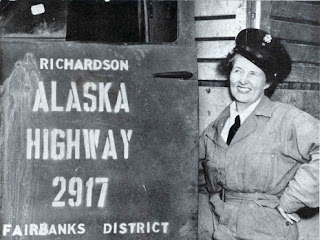