Admiral Thomas Cochrane, 10th Earl of Dundonald, Marquess of Maranhão, (1775 – 1860), styled Lord Cochrane between 1778 and 1831. British naval flag officer of the Royal Navy. He was a daring and successful captain of the Napoleonic Wars, leading Napoleon to nickname him Le Loup des Mers ('The Sea Wolf'). He was successful in virtually all his naval actions.
He was dismissed from the Royal Navy in 1814 following a controversial conviction for fraud on the Stock Exchange. He helped organise and lead the rebel navies of Chile and Brazil during their respective successful wars of independence through the 1820s. While in charge of the Chilean Navy, Cochrane also contributed to Peruvian Independence through the Freedom Expedition of Perú.
In 1832, he was pardoned by the Crown and reinstated in the Royal Navy with the rank of Rear Admiral of the Blue. After several more promotions, he died in 1860 with the rank of Admiral of the Red, and the honorary title of Rear-Admiral of the United Kingdom.
His life and exploits inspired the naval fiction of 19th- and 20th-century novelists, particularly the figures of C. S. Forester's Horatio Hornblower and Patrick O'Brian's protagonist Jack Aubrey.

- "The youth was 6 foot 2, with a mop of distinctive red hair, dreamy yet penetrating blue eyes, a prominent hook nose..."  https://books.google.it/books…

- "He must have been an amazing sight to his enemies, towering over six feet with red hair."  https://tarnmoor.com/tag/lord-cochrane/

- "The same qualities that made this 6'2" Scottish captain, with his shock of red hair and his outspoken opinions such an excellent commander proved to be something of a liability in the rarefied atmosphere of Westminster."  http://www.scottishessays.co.uk/lord-thomas-cochrane-rn--sc…

- "At age forty-eight his mop of red hair was still thick, but turning gray."  https://books.google.it/books… 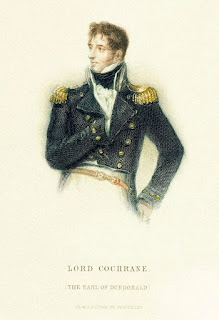