Roscoe Conkling (1829 – 1888). Lawyer and politician from New York who served both as a member of the United States House of Representatives and the United States Senate. He was the leader of the Stalwart faction of the Republican Party, the first Republican senator from New York to be elected for three terms, and the last person to turn down a U.S. Supreme Court appointment after he had already been confirmed to the post.
Conkling, who was temperate and detested tobacco, was known for his physical condition, maintained through regular exercise and boxing, an unusual devotion for his time. Conkling was elected to the Senate in 1867 as a leading Radical, who supported the rights of African Americans during Reconstruction.
Conkling had a reputation as a womanizer and philanderer, and was accused of having an affair with the married Kate Chase Sprague. According to a well-known story, Sprague confronted the philandering couple at Sprague's Rhode Island summer home and pursued Conkling with a shotgun and threatened to throw Kate out of a second story window.

- "His red hair an Titian beard, his foppish attire and noble carriage..."  https://books.google.it/books…

- "... combing his flame-red hair into a trademark curl above his eyes."  https://books.google.it/books…

- "The senatorial head is what lady novelists call leonine, and its thinning, wiry gray-red hair is brushed straight back from the broad forehead, at whose center is a perfect curl..."  https://books.google.it/books…

- "He had a pinted beard and dark red hair."  https://books.google.it/books… 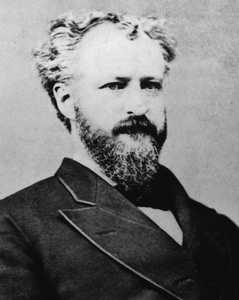