Hetty Carr Cary (1836 – 1892). Wife of CSA General John Pegram and, later, of pioneer physiologist H. Newell Martin. She is best remembered for making the first three battle flags of the Confederacy (along with her sister and cousin). Hetty was related to two of Virginia's most influential families, the Jeffersons (through her mother's family) and the Randolphs (through her paternal grandmother, Virginia Randolph Cary). She was also a lineal descendant of Pocahontas.

- "Henry Kyd Douglas, in I Rode With Stonewall, described Hetty as "the most beautiful woman of her day and generation" and "the handsomest woman in the Southland -- with her classic face, her pure complexion, her auburn hair. her perfect figure and her carriage, altogether the most beautiful woman I ever saw in any land."  https://en.wikipedia.org/wiki/Hetty_Cary
- "... she was still unmarried at twnty-five, though her auburn hair, dancing eyes and perfect figure..."  https://books.google.it/

- "... he maried Hetty Cary, a red-haired belle who was driven to her wedding in the Confederate president's carriage."  https://books.google.it/books… 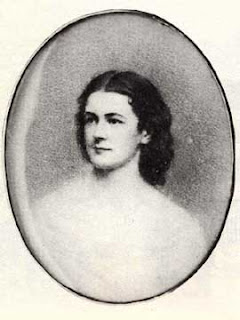