Hazel Brooks (1924 – 2002). American actress.
The daughter of a sea captain, Brooks was born in Cape Town, South Africa. Her father died when she was three years old, and she moved with her mother to Brooklyn, New York.
Brooks became a model for Harry Conover when she was 16. A talent scout picked her and five other models to appear in the film Du Barry Was a Lady (1943). She made a series of pictures at the studio during the 1940s, culminating with a lead role in 1947 Body and Soul with John Garfield.
She had captured almost as much attention three years earlier in 1944 when, at age 19, she married the long-time head of her studio's fabled art department, Cedric Gibbons, then 49. The wedding occurred on October 25, 1944. Although the age difference inspired a certain amount of winking in the gossip columns at the time, the marriage proved a strong one and lasted until Gibbons' death in 1960. Brooks subsequently married Dr. Rex Ross (1908-1999), a surgeon and founder of the Non-invasive Vascular Clinic at Hollywood Hospital.
In the years after her retirement from films, she became a skilled still photographer. She also worked actively for a number of children's charities.


- "With her red hair, green eyes, high cheekbones and svelte figure she certainly has what it takes."  https://www.aenigma-images.com/…/hazel-brooks-the-human-he…/

- "She has green eyes, reddish hair and feels that it would be nice to visit the grave of John Keats."  https://books.google.it/books… 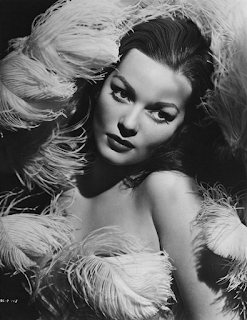 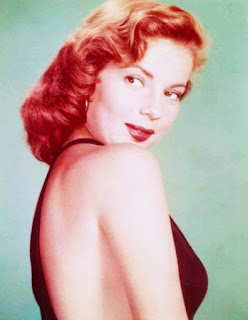