Mary Elizabeth Hughes (1919 – 1995). American film, television, and stage actress best known for her roles in B movies.
In 1940 she was offered a contract with 20th Century-Fox. Later that year she landed a role opposite John Barrymore in The Great Profile, a part she later noted as one of her favorites. Fox did not renew her contract when it expired in 1943 and the following year she began appearing in a nightclub act and soon signed a three-picture deal with Universal Pictures.
Her most famous role was as Henry Fonda's former girlfriend in the Best Picture Academy Award nominee The Ox-Bow Incident (1943). Throughout the mid-1940s and early 1950s, Hughes appeared in film and television roles, including the cult classic I Accuse My Parents, Anthony Mann's early noir masterpiece The Great Flamarion, where she co-starred with Erich von Stroheim and Dan Duryea, Wanted: Dead or Alive (episode "Secret Ballot"), The Devil's Henchman, The Abbott and Costello Show, Dragnet and Studio One.


- "After 3 years of using her natural red hair on screen, she colors it blonde, the look preferred by the public and film producers alike."  http://www.glamourgirlsofthesilverscreen.com/…/M…/index.html 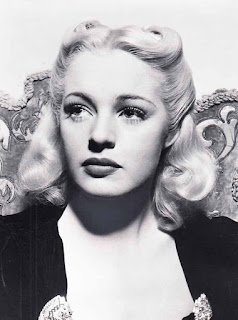