Charles James Martin (1886 – 1955). American modernist artist and arts instructor. He worked in a variety of media including etching, lithography, water color, monotype, linocut, woodcut, oil, photography, mezzotint and silversmithing. Born in Mansfield, England in 1886, Martin emigrated to the US as a boy and lived out the remainder of his life as an American. He studied art under Arthur Wesley Dow at Dow's Ipswich Summer School of Art as well as at Columbia University Teachers College, where he became an instructor himself in 1914.
Martin attained professorship at Teachers College in 1923 and continued his work there into the 1940s. Georgia O'Keeffe attended Martin's class at Teachers college in 1914–15 and she considered his instruction significant enough that she continued sending examples of her work for his critique in the period after she attended his class. Martin even had a fan in Winston Churchill.


- "Martin was young and appealing, with flaming red hair and irresistible blushes."  https://books.google.it/books… 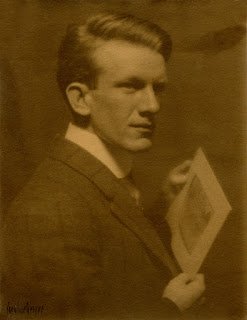