Ethel Clayton (1882 – 1966). American actress of the silent film era.
On the stage she appeared mainly in musicals or musical reviews such as The Ziegfeld Follies of 1911. These musical appearances indicate a singing talent Clayton may have possessed but which went unused in her many silent screen performances.
Following appearances on screen in short dramas from 1909 to 1912, Clayton made her feature-length film debut in For the Love of a Girl in 1912. Barry O'Neil directed the film, and Clayton would later be directed by William Demille, Robert G. Vignola, George Melford and Donald Crisp in subsequent features film. Like many silent film actors, Clayton's career was hurt by the coming of sound to motion pictures. She continued her career in small parts in movies until she retired in 1948. Her screen credits number more than 180. 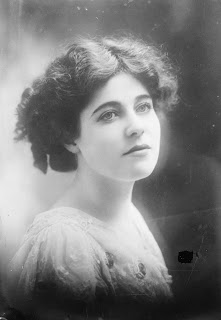