Marion Frankfurter (née Denman, 1890 - 1975). Wife of the Austrian-American lawyer, professor, and jurist Felix Frankfurter (1882-1965), who served as an Associate Justice of the United States Supreme Court. He became a friend and adviser of President Franklin D. Roosevelt, who appointed him to fill the Supreme Court vacancy caused by the death of Benjamin Cardozo.
Frankfurter and Denman married in 1919. She was a Smith College graduate and the daughter of a Congregational minister. They married after a long and difficult courtship, and against the wishes of Frankfurter's mother, who was disturbed by the prospect of her son marrying outside the Jewish faith. Frankfurter was a non-practicing Jew, and regarded religion as "an accident of birth". Frankfurter was a domineering husband and Denman suffered from frail health. She suffered frequent mental breakdowns. The couple had no children.


- "Among them was Marion Denman, Frankfurter's future wife, the daughter of a Congregational minister from Longmeadow, Massachusetts, pale and beautiful, with auburn hair and hazel eyes."  https://scholarship.law.edu/cgi/viewcontent.cgi…

- "Sharp-tongued, intelligent, coquettish, and a trifle vain... with her shimmering auburn hair and hazel eyes..."  https://books.google.fr/books… 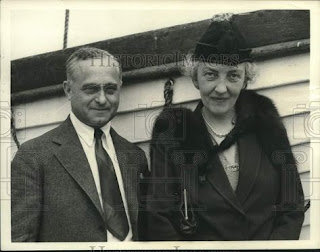