Sir William Hamo Thornycroft (1850 – 1925). English sculptor, responsible for some of London's best-known statues. He was a keen student of classical sculpture and became one of the youngest members of the Royal Academy.
He was the leading figure in the movement known as the New Sculpture, which provided a transition between the neoclassical styles of the 19th century and its later fin-de-siècle and modernist departures.
Hamo Thornycroft belonged to the Thornycroft family of sculptors. Both of his parents, Thomas and Mary, were distinguished sculptors. In addition to his parents, Thornycroft's grandfather John Francis was also a distinguished sculptor. His brother, Sir John Isaac Thornycroft, became a successful naval engineer; their sister, Theresa, was the mother of the poet Siegfried Sassoon; Theresa and sisters Alyce and Helen Thornycroft were artists.


- "A tall, imposing figure with fiery red hair, Thornycroft sits on a stool, gazing curiously at the camera."  https://artistsathome.emorydomains.org/…/w--hamo-thornycrof…

- "Physically, he was tall, ‘extremely powerful in frame’ with ‘curly, golden-red’ hair."  https://www.npg.org.uk/…/mp04…/sir-william-hamo-thornycroft… 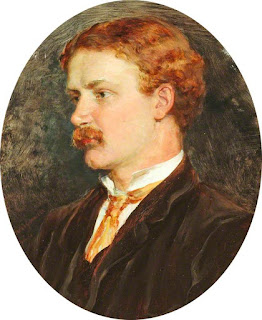