Rose Harriet Pastor Stokes (née Wieslander; 1879 – 1933). American socialist activist, writer, birth control advocate, and feminist. She was a figure of some public notoriety after her 1905 marriage to Episcopal millionaire J. G. Phelps Stokes, a member of elite New York society, who supported the settlements in New York. Together they joined the Socialist Party. Pastor Stokes continued to be active in labor politics and women's issues, including promoting access to birth control, which was highly controversial at the time.
In 1919, Pastor Stokes was a founding member of the Communist Party of America and helped develop it into the 1930s. In addition to her writing on politics, she wrote poetry and plays; one was produced in 1916 by the Washington Square Players.


- "Rose Pastor Stokes was there in her blazing coif of red hair, shouting, "Arise! Unite! Down with the bosses!"  https://books.google.it/books… 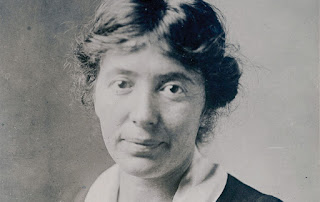