Maud Swartz (née O'Farrell, 1879-1937). Irish-born American labor organizer who worked to improve the lives of women and children. She served as president of the Women's Trade Union League from 1922 to 1926. In 1931 she was appointed secretary of the New York State Department of Labor under Industrial Commissioner Frances Perkins. She was the first woman and the first trade unionist to hold that position.
In 1912 she met Rose Schneiderman, with whom she had a close friendship until her death. In the 1920s, she and Schneiderman befriended Eleanor Roosevelt, who had joined the WTUL They often visited the Roosevelts and discussed labor problems.


- "Still, in 1926 Eleanor took the risk, because she believed that the two red-headed labor organizers had important insights to ofer her husband."  https://books.google.it/books…

- "Swartz was a red-haired, sharp-tongued Irish-born printer with a genius for administration."   https://books.google.it/books… 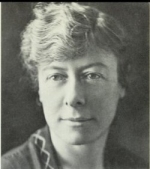