Bess Furman (1894–1969). American reporter who covered the FDR White House, especially Eleanor Roosevelt, and became one of the best-known women reporters of her day.
Between 1920 and 1929 she wrote for various Nebraska publications. She was a staff write at the Kearney Daily Hub and a news feature writer and Sunday magazine writer for the Omaha Bee-News. In 1928 her award-winning a story on presidential candidate Alfred E. Smith caught the eye of the Associated Press. Furman, anxious to make a name for herself outside of Nebraska, joined the AP’s Washington bureau in 1929. She was the first woman to regularly cover the House of Representatives for a news agency. Her main assignments were to cover first ladies Lou Hoover and Eleanor Roosevelt and FDR’s campaign activities.
During World War II she worked in the Office of War Information as assistant chief of the Magazine Division. From 1943 to 1961 she worked for the Washington bureau of the New York Times. Throughout this period she became increasingly interested in covering education, health, and science. In 1961 she began working in the Department of Health, Education, and Welfare, and was made head of its Press Information Section the following year.


- "Red-haired and assertive, Furman showed her skill at covering political figures when she won a prize for a story on Alfred E. Smith..."  https://books.google.it/books… 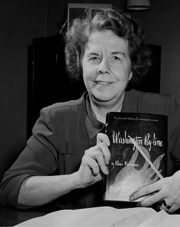