John Wesley Powell (1834 – 1902). U.S. soldier, geologist, explorer of the American West, professor at Illinois Wesleyan University, and director of major scientific and cultural institutions. He is famous for the 1869 Powell Geographic Expedition, a three-month river trip down the Green and Colorado rivers, including the first official U.S. government-sponsored passage through the Grand Canyon.
Powell served as second director of the U.S. Geological Survey (1881–1894) and proposed, for development of the arid West, policies that were prescient for his accurate evaluation of conditions. He became the first director of the Bureau of Ethnology at the Smithsonian Institution during his service as director of the U.S. Geological Survey, where he supported linguistic and sociological research and publications.


- "John Wesley Powell, a bluff, daring, one-armed, red-haired giant, was not only the first white man to traverse the lenght of the dangerous Colorado canyon..."  https://books.google.it/books… 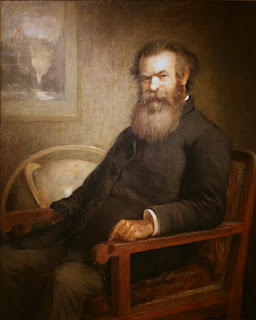