Rose Schneiderman (1882 – 1972). American socialist and feminist, and one of the most prominent women labor union leaders.
She is credited with coining the phrase "Bread and Roses," to indicate a worker's right to something higher than subsistence living.

- “Rose Schneidermanìs red hair, her anger, did make her seem like a torch, sometimes.” https://books.google.it/books… 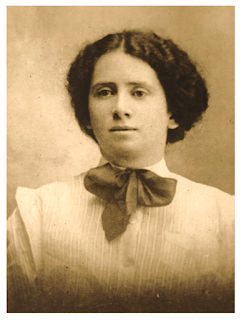