George Rogers Clark (1752 – 1818). American surveyor, soldier and militia officer from Virginia, who became the highest-ranking American patriot military officer on the northwestern frontier during the American Revolutionary War. He served as leader of the militia in Kentucky (then part of Virginia) throughout much of the war. He is best known for his celebrated captures of Kaskaskia (1778) and Vincennes (1779) during the Illinois Campaign, which greatly weakened British influence in the Northwest Territory. The British ceded the entire Northwest Territory to the United States in the 1783 Treaty of Paris, and Clark has often been hailed as the "Conqueror of the Old Northwest".
Brother of William Clark.


- "English explains that several bodies were exhumed before Clark's skeleton was finally identified by its military uniform, amputated leg, and red hair."  https://en.wikipedia.org/wiki/George_Rogers_Clark

- "This is pretty high praise from possibly the most famous American red-haired revolutionary!"  https://locustgrovelouisville.wordpress.com/…/our-red-hair…/

- "He was well over six feet tall, had red hair and was reliably reported to have been rugged and handsome."   https://www.in.gov/history/2958.htm 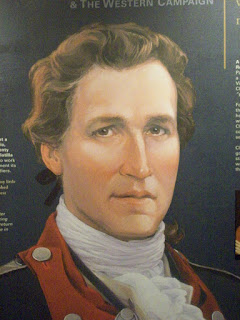