Mickey Free (b. 1847/1848; d. 1914), birth name Felix Telles. Apache Indian scout and bounty hunter on the American frontier. Following his kidnapping by Apaches as a child, he was raised as one and became a warrior. Later he joined the US Army's Apache scouts, serving at Fort Verde between December 1874 and May 1878 and was given the nickname Mickey Free.

- "Due to his red hair and other features, the soldiers claimed the scout named Feliz, bore a resemblance to a character in Charles Lever's 1840 novel, Charles O'Malley: The Irish Dragoon named "Mickey Free".  https://en.wikipedia.org/wiki/Mickey_Free


- "She had a little boy who also appeared to be partly of Celtic descent, as he had a red head, and was nicknamed "Micky Free."  http://www.fullbooks.com/Building-a-State-in-Apache-Land.ht…

- "The Indians killed all the strangers except a “small red-haired, blue eyed, freckled baby boy, Micky Free, whom they took captive and raised as an Apache."  https://essays.wls.wels.net/…/123…/2484/KesselMayerhoff.pdf…

- "He had long, fiery red hair and one blue eye, the other having been hooked out by a wounded deer when he was twelve years old. He had a small, red mustache, and a “mug” that looked like the original map of Ireland."  https://montanapioneer.com/the-life-of-tom-horn/

- "His hair was long and fire red."  https://books.google.it/books… 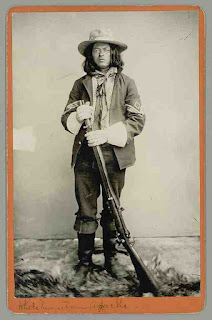