Agnes George de Mille (1905 – 1993). American dancer and choreographer.
Agnes de Mille was born in New York City into a well-connected family of theater professionals. Her father William C. deMille and her uncle Cecil B. DeMille were both Hollywood directors. Her mother, Anna Angela George, was the daughter of Henry George, the economist. On her father's side, Agnes was the granddaughter of playwrights Henry Churchill de Mille and Matilda Beatrice deMille.

- "Rich and clever, she had frizzy red hair, a big nose, a short stumpy body that she forced to dance, and a surprising sex appeal."  https://theartsdesk.com/…/no-intermissions-life-agnes-de-mi…


- "... Agnes had her mother's blue eyes, a thick mane of curly red hair and a freckled face."  https://books.google.it/books…

- "She always seemed rather disheveled, with her mass of wild, unruly red hair."  https://epdf.pub/agnes-de-mille-women-in-the-arts-series-wo… 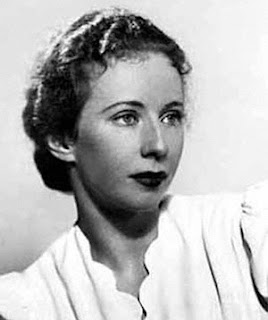