Robert James Fitzsimmons (1863 – 1917). British professional boxer who made boxing history as the sport's first three-division world champion. He also achieved fame for beating Gentleman Jim Corbett, (the man who beat John L. Sullivan), and he is in The Guinness Book of World Records as the lightest heavyweight champion.
Considered one of the hardest punchers in boxing history, Fitzsimmons is ranked as No. 8 on The Ring magazine's list of 100 greatest punchers of all time.


- "Affectionately known as ‘Ruby’ Robert (for his red hair and fair complexion) he was often described as a ‘physical freak’ (The ‘freckled freak’ being one of his more sour tasting name tags)."  http://coxscorner.tripod.com/fitzsimmons.html

- "That, allied to a balding pate with tufts of red hair hanging on for dear life, a heavily freckled face and body..."  https://www.boxingmonthly.com/…/bob-fitzsimmons-the-final-…/

- "The red-haired Fitzsimmons - nicknamed "Ruby Robert" and "the Freckled Wonder" - was relatively small for a heavyweight..."  https://www.nzherald.co.nz/boxing/news/article.cfm… 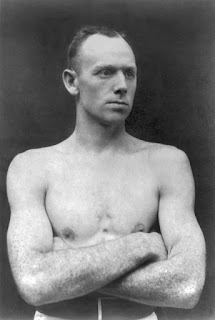