Louis-Jacques-Mandé Daguerre (1787 – 1851), better known as Louis Daguerre. French artist and photographer, recognized for his invention of the daguerreotype process of photography. He became known as one of the fathers of photography. Though he is most famous for his contributions to photography, he was also an accomplished painter and a developer of the diorama theatre. 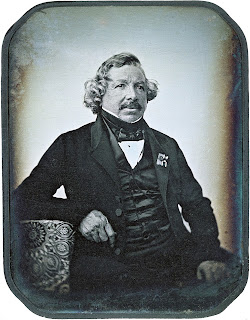