Inessa Fyodorovna Armand (1874 - 1920). French-Russian communist politician, member of the Bolsheviks and feminist. She was also Lenin's lover.
Historian Michael Pearson wrote about her: "She was to help him (Lenin) recover his position and hone his Bolsheviks into a force that would acquire more power than the tsar, and would herself by 1919 become the most powerful woman in Moscow."

- "Vivacious, attractive and gifted, the Okhrana described her as of medium height, with an oval and thin face, grey eyes, sharp nose and red hair."   https://books.google.it/books

- "She was 36, auburn-haired and green-eyed, a member of Moscow's French community and on the run from the Russian police."
https://www.theguardian.com/education/2001/sep/29/artsandhumanities.highereducation1 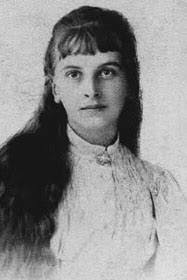