Nathaniel Lyon (1818 – 1861). He was the first Union general to be killed in the American Civil War and is noted for his actions in the state of Missouri at the beginning of the conflict.
He fought in the Second Seminole War and the Mexican–American War, before being sent to the divided state of Kansas, where he developed strong pro-Union views. In February 1861, Lyon was made commander of the Union arsenal in St. Louis, Missouri (another divided state), where Lyon forced the surrender of the pro-Confederate militia. This caused a riot by civilians, with Lyon’s troops firing into the crowd (Camp Jackson Affair). Lyon was promoted to brigadier general and was given command of Union troops in Missouri. He was killed at the Battle of Wilson’s Creek, while trying to rally his outnumbered soldiers. However, Lyon’s efforts had prevented the State of Missouri from joining the Confederacy.

- "A tough, aggressive officer, short of stature with fiery red hair and a volcanic temper, Lyon was at his best whenever decisive action was warranted."  https://webcache.googleusercontent.com/search…

- "Nathaniel Lyon, short of stature, red-haired, in the prime of manhood and perfected soldiership, fiery, jealous for his country’s rights and dignity,.."  http://www.civilwarstlouis.com/History/PlantersHotel.htm

- "He had red hair and a legendary short temper."  https://books.google.it/books…

- "…disguised in women’s clothes, including a bonnet and veil to hide his red hair and whiskers, [Lyon] had ridden in an open carriage to reconnoiter a secessionist camp."  http://npg.si.edu/…/battle-wilson%E2%80%99s-creek-missouri-… 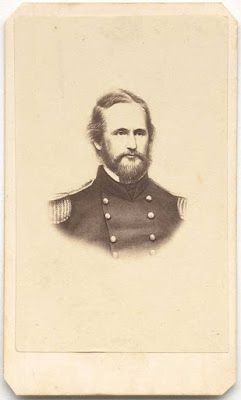