Hatshepsut (1507–1458 BC). Fifth pharaoh of the Eighteenth Dynasty of Egypt and chief wife of Thutmose II.
The hair on the head of Hatshepsut's mummy is red, but it's not clear whether this was her natural colour, a dye or the result of a chemical process.

Some say it was natural:
- "The mummy had the typical queen's posture and still had long blond-red hair which was the color of Hatshepsut hair." http://www.bukisa.com/…/395549_hatshepsut-the-egyptian-quee…


The only way to ascertain the truth would be an analysis of the follicles (as in the case of Ramses II), and I'm surprised they haven't done it yet. 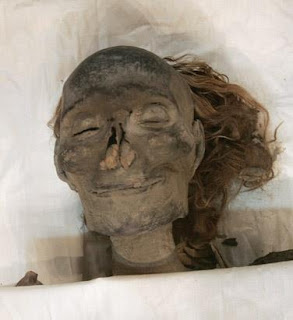