Ismail I (1487 – 1524). Founder of the Safavid dynasty of Iran, ruling from 1501 to 23 May 1524 as shah (king).
During Ismail's reign, mainly in the late 1510's, the first steps for the Habsburg–Persian alliance were set as well, with Charles V and Louis II of Hungary being in contact with a view to combining against the common Ottoman Turkish enemy.

- “Ismail was described by contemporaries as having a regal appearance, gentlemanly in quality and youthfulness. He also had a fair complexion and red hair. His appearance compared to other olive-skinned Persians, his descent from the Safavid Shaykhs, and his religious ideals, contributed to people's expectation based on various legends circulating during this period of heightened religious awareness in Western Asia.

An Italian traveller describes Ismail as follows:
“ This Sophi is fair, handsome, and very pleasing; not very tall, but of a light and well-framed figure; rather stout than slight, with broad shoulders. His hair is reddish; he only wears moustachios, and uses his left hand instead of his right.” https://en.wikipedia.org/wiki/Ismail_I 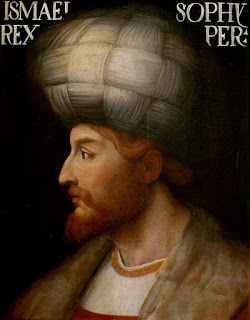