Charlemagne (742 – 814), numbered Charles I. King of the Franks from 768, King of the Lombards from 774 and Emperor of the Romans from 800. He was the first recognised emperor to rule from western Europe since the fall of the Western Roman Empire three centuries earlier. The expanded Frankish state that Charlemagne founded is called the Carolingian Empire.

We don’t have any description of Charlemagne’s hair, however some suggest it was red:
- “He had the red hair and blue eyes of his tribe and was possessed of both strength and stamina.” https://www.kibin.com/…/a-biography-and-life-work-of-charle…


- “The emperor Charlemagne painted his palace red, wore red shoes and is even rumoured to have had red hair.” https://www.theguardian.com/…/…/why-red-is-the-oldest-colour 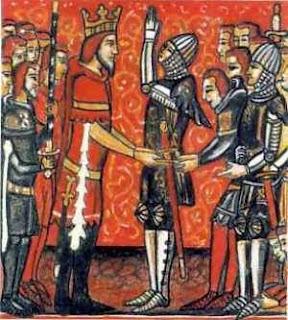