Edward III (1312 – 1377). King of England from 25 January 1327 until his death; he is noted for his military success and for restoring royal authority after the disastrous and unorthodox reign of his father, Edward II. Edward III transformed the Kingdom of England into one of the most formidable military powers in Europe.

- “Edward was tall and handsome with golden red hair and penetrating eyes, a flamboyant, affable and generous man.” http://www.newman-family-tree.net/King-Edward-III.html 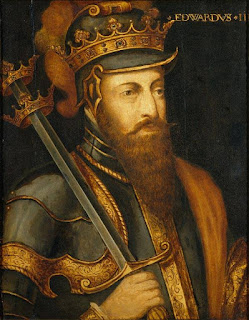