"Custer himself has been depicted arrayed in a short jacket, an enormous red tie, and long red hair falling over his shoulders."


"He had freckles, and reddish-blonde hair."


"Deep blue eyes and a shock of reddish blonde hair rounded out his features."


"He was an over the top character who loved publicity and gained more than other more accomplished officers, the press for their part loved him a young showman with long red hair and a taste for velvet jackets with gold braid he would not have been out of place in Napoleon's cavalry of half a century earlier."

However, Plains Indians used to calling him "Yellow hair", so it's possible either he was a strawberry blond or, over the years, his hair turned to a sandy shade, which is not unusual for redheads before their hair becomes white. 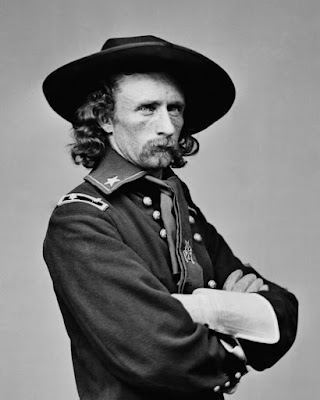