John Stuart (1718 – 1779). Scottish-born official of the British Empire in the colony of South Carolina, North America. He was the superintendent for the southern district of the British Indian Department from 1761 to 1779.
He was the third of ten sons born to Bailie John Steuart, a prosperous merchant of that city, and his second wife Christian MacLeod, a native of Skye. Although his father spelled his surname Steuart, John always spelled it Stuart, perhaps this was to emphasize his relationship to the Royal family.


- "He spoke the Cherokee language fluently and was known by the Cherokees as Oonotota or "Bushyhead", on account of his great shock of curly red hair."  http://dunhamtree.homestead.com/files/np9.htm

- "In his early life, the red-haired Scotsman had been a clerck in Spain."  https://books.google.it/books…

- "Bushyhead, they sometimes called him, because of his wavy auburn hair."  https://books.google.it/books… 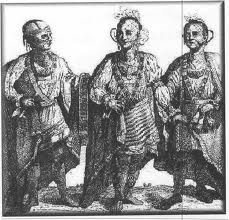