Thomas Jefferson (1743 – 1826). American statesman, diplomat, lawyer, architect, and Founding Father who served as the third president of the United States from 1801 to 1809. Previously, he had served as the second vice president of the United States from 1797 to 1801. The principal author of the Declaration of Independence, Jefferson was a proponent of democracy, republicanism, and individual rights, motivating American colonists to break from the Kingdom of Great Britain and form a new nation; he produced formative documents and decisions at both the state and national level.

Husband of Martha Wayles Skelton  and father of Martha Jefferson Randolph and of Eston Hemings Jefferson.

- "Although his natural hair color was consistently described as red or sandy red, it was often dressed and powdered."
http://www.isthisjefferson.com/DLP_E01.html

- "It is still well covered with hair, which having been once red, and now turning gray, is of an indistinct sandy color." https://www.monticello.org/site/research-and-collections/physical-descriptions-jefferson 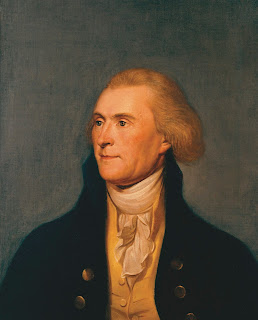