Harold Edward "Red" Grange (1903 –  1991), nicknamed "The Galloping Ghost". American football halfback for the University of Illinois, the Chicago Bears, and the short-lived New York Yankees. His signing with the Bears helped legitimize the National Football League (NFL).
In college, Grange was a three-time consensus All-American and led his team to a national championship in 1923. He was the only consensus All-American running back in 1924 who was not a member of the Four Horsemen of Notre Dame. The same year, Grange became the first recipient of the Chicago Tribune Silver Football award as the Big Ten Conference's most valuable player. In 2008, he was named the best college football player of all time by ESPN, and in 2011, he was named the Greatest Big Ten Icon by the Big Ten Network.


- "A flashing, red-haired youngster, running and dodging with the speed of a deer..." http://archive.nytimes.com/www.nytimes.com/packages/html/sports/year_in_sports/10.18a.html?scp=1&sq=Ten%2520Rapid&st=cse

- "While the stone columns dedicated to those heroes of yesterday stood their immortal guard over the heroes of tomorrow this red headed hero of today ran the five touchdowns." https://muse.jhu.edu/article/635124/summary 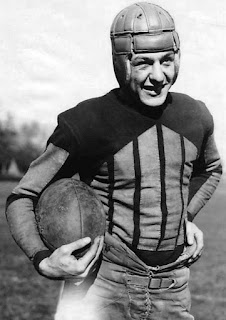