George Washington (1732 – 1799). American political leader, military general, statesman, and Founding Father who served as the first president of the United States from 1789 to 1797. He led Patriot forces to victory in the nation's War for Independence. He presided at the Constitutional Convention of 1787 which established the U.S. Constitution and a federal government. Washington has been called the "Father of His Country" for his manifold leadership in the formative days of the new nation.
Washington played a key role in the adoption and ratification of the Constitution and was then elected president by the Electoral College in the first two elections. He implemented a strong, well-financed national government while remaining impartial in a fierce rivalry between cabinet members Thomas Jefferson and Alexander Hamilton. He set enduring precedents for the office of president, including the title "President of the United States", and his Farewell Address is widely regarded as a pre-eminent statement on republicanism.


- "As a young man, Washington had red hair".
https://books.google.it/books

- "He had piercing grey-blue eyes, fair skin, and light reddish-brown hair, although he wore his hair powdered in the fashion of the day." https://en.wikipedia.org/wiki/George_Washington

- Standing over six feet tall, with his reddish hair, it was hard not to notice Washington..."  https://books.google.it/ 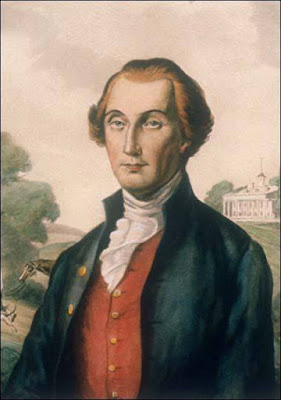