Henry VIII of England (1491 - 1547). Son of Henry VII of England and Elizabeth of York.
His children were Elizabeth I , Mary I, Edward VI and  Henry FitzRoy (the only illegitimate offspring he acknowledged) . His grandmother was Elizabeth Woodville. Brother of Mary, Margaret and Arthur.
He was the second Tudor monarch, succeeding his father, Henry VII.

Henry is best known for his six marriages, in particular his efforts to have his first marriage, to Catherine of Aragon, annulled. His disagreement with the Pope on the question of such an annulment led Henry to initiate the English Reformation, separating the Church of England from papal authority. He appointed himself the Supreme Head of the Church of England and dissolved convents and monasteries, for which he was excommunicated. Henry is also known as "the father of the Royal Navy"; he invested heavily on the navy, increasing its size greatly from a few to more than 50 ships.
Besides Catherine of Aragon, he had three more red-haired wives: Anne Boleyn, Catherine Howard and Catherine Parr.
- "The child, small but pretty, already showed signs that she had inherited the red-gold hair of both her parents and the clear Tudor complexion" https://books.google.it/


- " It is known that Henry was ‘ginger’, and the Joos Van Cleve portrait (c 1535 – see below) confirms this so, colourwise, he probably had hair colour somewhere on a strawberry blonde, through deep coppery gold tones, to a chestnut auburn tones spectrum when he was in his teens." http://www.tudorsdynasty.com/excavating-the-face-of-young-henry-viii-guest-article/ 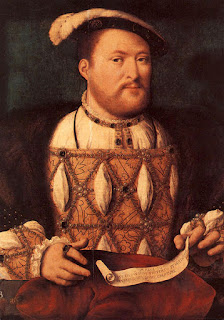 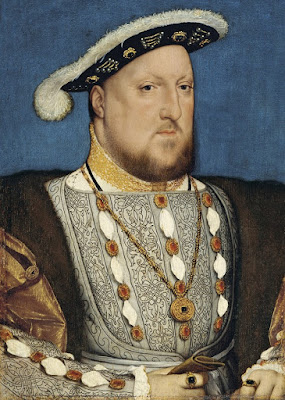 (The familiar figure of Henry in classic pose) 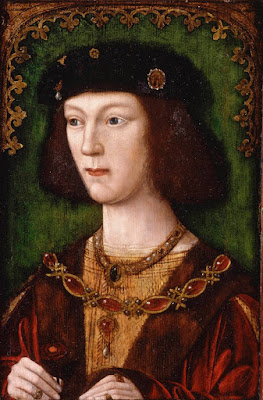