Jessie White Mario (1832 – 1906). English (and naturalized Italian) writer and philanthropist. She is sometimes referred to as "Hurricane Jessie" in the Italian press.
She was a nurse to General Giuseppe Garibaldi's soldiers in four wars; she researched living conditions in subterranean Naples and working conditions in Sicily’s sulphur mines. She wrote copiously (in English and Italian) as both a journalist and a biographer. Litta Visconti Arese in his introduction to The Birth of Modern Italy, says Jessie was the first woman journalist in England.
Her most famous biography was about Giuseppe Garibaldi.

- "She had very red hair, an extremely animated face, and a peculiarly excitable manner." http://www.florin.ms/laurel.html 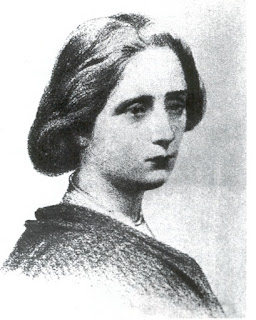