Praskovia Ivanovna Kovalyova-Zhemchugova also Kovaleva or Kovalyova, Kovaleva-Zhemchugova, Zhemchugova-Sheremeteva, and Sheremeteva or Sheremetyeva (1768 – 1803). Russian serf actress and soprano opera singer.
By the age of 17, she could read and write French and Italian fluently, played the harp and clavichord, and was acknowledged by her contemporaries for her operatic and dramatic abilities. In a career that spanned almost two decades, Praskovia performed in over a dozen operas, including Monsigny's Le déserteur and Aline, reine de Golconde, Paisiello's L'infante de Zamora, Jean-Jacques Rousseau's Le Devin du village and Piccinni's La buona figliuola maritata.
Her most important role was Eliane in Grétry's opera Les Mariages samnites. Assuming the part for the first time in 1785, Praskovia sang Eliane for 12 years — a first in the history of serf theatre.
In the mid-1780s, Praskovya became the mistress of Count Nikolai Sheremetev, the impresario of the family serf theater.
At the height of the theatre's flowering in the late 1790s Praskovia became ill, possibly with consumption (tuberculosis), and was forced to retire.
In 1801 Nikolai and Praskovia married in Moscow in the strictest secrecy. Within months of their wedding Praskovia became pregnant. On February 3, 1803 she gave birth to a son, Dmitry, but pregnancy and childbirth destroyed her poor health and she died on February 23 at the Sheremetev palace in St. Petersburg.


- "With dark, expressive eyes, a pale complexion, auburn hair, and a slight, almost fragile build, she performed under the name of “the Pearl.” https://erenow.com/biographies/catherinethegreat/47.html 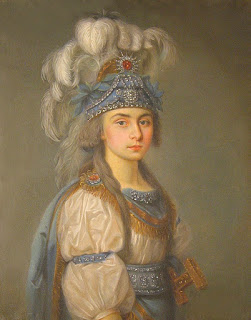