Sir Banastre Tarleton, 1st Baronet, (1754 – 1833). British soldier and politician. Tarleton was eventually ranked as a general years after his service in the colonies during the American Revolutionary War, and afterwards did not lead troops into battle.
Banastre Tarleton was known for his British military service in the American War of Independence, which started when Tarleton was twenty-one. As a military commander he was the subject of a rebel American campaign which claimed that Tarleton's British Legion had massacred surrendering Continental Army troops at the Battle of Waxhaws, South Carolina, in 1780.
After returning to Great Britain in 1781 at the age of 27, Tarleton was elected a Member of Parliament for Liverpool and returned to office in the early 19th century.


- "His bearing and appearance probably boosted him up the ladder: though short, he was well-proportioned and very muscular, red-headed and dark-eyed, with fine manners and a charm that seems to have appealed greatly to women." http://www.his.jrshelby.com/kimocowp/tarlton.htm

- "Stocky and powerful, with sandy red hair and a rugged visage that disclosed a hard and unsparing nature, Tarleton had the reputation of one who was ‘anxious of every opportunity of distinguishing himself.’" https://astrofella.wordpress.com/…/07/12/beauty-and-barbar…/

- "A thick-shouldered, compact man of middle height with bright red hair and a hard mouth..." https://books.google.it/books…

- "The short, red-headed Tarleton stood for several portraits after his return to England..." https://books.google.it/books…

- "He was strong and athletic with reddish hair and dark eyes." https://royalfavourites.blogspot.com/…/british-courtesans-l… 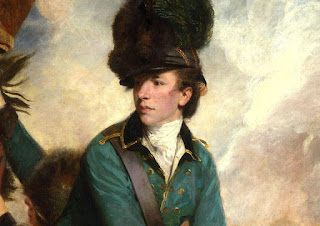