Christine Margaret Keeler (1942 – 2017). English model and topless showgirl. Her meeting at a dance-club with society osteopath Stephen Ward drew her into fashionable circles. At the height of the Cold War, she became sexually involved with a married government minister, John Profumo, as well as with a Soviet diplomat. A shooting incident between two of her other lovers caused the press to investigate her, revealing that her affairs could be threatening national security. In the House of Commons, Profumo denied any improper conduct but later admitted that he had lied. This incident discredited the Conservative government of Harold Macmillan in 1963 in what became known as the Profumo affair. Keeler was alleged to have been a prostitute and although this was not a criminal offence in itself, Ward was found guilty at trial of being her pimp – a trial only instigated after the embarrassment caused to the government.


- "Because of Christine Keeler, the red-haired, high-priced call girl lounging in the warm sunshine at right..." https://books.google.it/books…

- "It was at a party at the home of newspaper magnate Lord Astor that Mr. Profumo met the red-haired Keeler, who was swimming naked in the pool at the time." https://www.washingtonpost.com/…/879e1a6d-69e8-49df-aad1-…/…

- "Christine Keeler was stunning, leggy and red-headed and was soon moving in Mayfair’s smartest but not necessarily the most savoury circles." https://www.irishexaminer.com/…/a-very-british-scandal-the-… 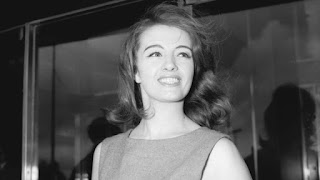