James II (1430 – 1460), who reigned as King of Scots from 1437 on, was the son of King James I and Joan Beaufort.
James's nickname, Fiery Face, referred to a conspicuous vermilion birthmark on his face which appears to have been deemed by contemporaries an outward sign of a fiery temper.
James was a politic, and singularly successful king. He was popular with the commoners, with whom, like most of the Stewarts, he socialised often, in times of peace and war. His legislation has a markedly popular character. He does not appear to have inherited his father's taste for literature, which was "inherited" by at least two of his sisters; but the foundation of the University of Glasgow during his reign, by Bishop Turnbull, shows that he encouraged learning.


- "Hot tempered, with a shock of red hair and a crimson birthmark on his cheek – a feature that earned him the nickname ‘Fiery Face’ – he dealt with his enemies promptly and without mercy." http://historicalhoney.com/james-ii-scotland-fired-passion/

- "Portrayals of James II of Scotland will usually have either red hair or a large red patch on his face to represent his birthmark." http://weavingthetapestry.tumblr.com/…/lastly-though-while-… 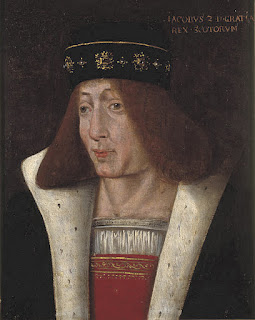 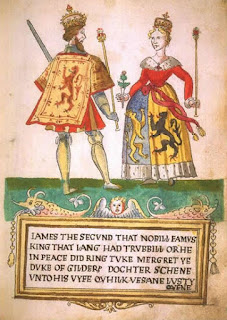