Capt. William George "Bay" Middleton (1846 – 1892). British horseman of the 19th century. He was equerry to John Spencer, 5th Earl Spencer, who was Lord Lieutenant of Ireland 1869-1874 and 1882-1885.
He had an 18-month affair with Lady (Henrietta) Blanche Ogilvy, while she was married to Colonel Henry Hozier. She confided in a letter (made public in August 2002 by her granddaughter, Mary Soames) to another lover that Bay Middleton was the father of her daughter, Clementine Hozier, born 1 April 1885, who was eventually to marry Sir Winston Churchill.


- "His nickname "Bay" was either a reference to his reddish-brown hair, or derived from the name of the winner of The Derby winner in 1836." https://en.wikipedia.org/wiki/George_%22Bay%22_Middleton

- "Captain Middleton was red-haired and had hazel eyes." https://books.google.it/books… 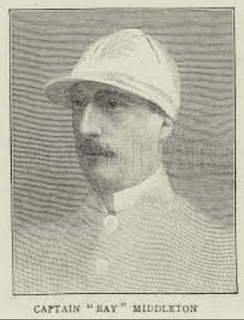