George Gaylord Simpson (1902 – 1984). US paleontologist. He was perhaps the most influential paleontologist of the twentieth century, and a major participant in the modern synthesis, contributing Tempo and Mode in Evolution (1944), The Meaning of Evolution (1949) and The Major Features of Evolution (1953). He was an expert on extinct mammals and their intercontinental migrations. He anticipated such concepts as punctuated equilibrium (in Tempo and Mode) and dispelled the myth that the evolution of the horse was a linear process culminating in the modern Equus caballus. He coined the word hypodigm in 1940, and published extensively on the taxonomy of fossil and extant mammals. Simpson was influentially, and incorrectly, opposed to Alfred Wegener's theory of continental drift.
He was Professor of Zoology at Columbia University, and Curator of the Department of Geology and Paleontology at the American Museum of Natural History from 1945 to 1959. He was Curator of the Museum of Comparative Zoology at Harvard University from 1959 to 1970, and a Professor of Geosciences at the University of Arizona until his retirement in 1982.


- "We have some swell fossils and a notebooks full of pretty colored geologic profileswhich I will publish someday and set on the parlor table so I can stroke my long red beard and say..." https://books.google.it/books…

- "A persnickety, frail little man with ginger hair that left his head early and lips that thinned as he aged..." https://www.stlmag.com/…/how-did-hundreds-of-peccaries-get…/

- "Looking back as an adult, Simpson felt that certain of his boyhood characteristics—his intelligence, shortness of stature, red hair, and visual impairment that limited ball playing— combined to foster antagonism from his peers." https://www.encyclopedia.com/…/paleo…/george-gaylord-simpson 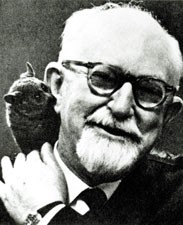