Marguerite Marie Alibert (1890 – 1971), also known as Maggie Meller and Princess Fahmy. French socialite. She started her career as a courtesan in Paris and in 1916 she had an affair with the Prince of Wales (later Edward VIII). After her marriage to Egyptian aristocrat Ali Kamel Fahmy Bey, she was frequently called Princess by the media of the time. In 1923, she killed her husband at the Savoy Hotel in London. She was eventually acquitted of the murder charge after a trial at the Old Bailey. Her affair with the Prince became the subject of the book The Prince, the Princess and the Perfect Murder. The killing of her husband was the focus of the book Scandal at the Savoy: The Infamous 1920s Murder Case.

- "At this time, she wore her striking auburn hair in long tresses, 'falling to my knees'." https://books.google.it/books…

- "The Prince, a newcomer to such arts, had been initiated, bewitched and then become more than a little obsessed with the shapely body, auburn hair and sensuous mouth of the woman he knew as Mme Maggie Meller." http://tweedlandthegentlemansclub.blogspot.com/2017/03/the-two-princes-francaise-and-perfect.html

- "... and later briefly King Edward VIII, chose to take this woman, with her glorious auburn hair and a flaming temper to match, as his first lover." https://www.express.co.uk/…/A-new-book-brings-to-light-the-… 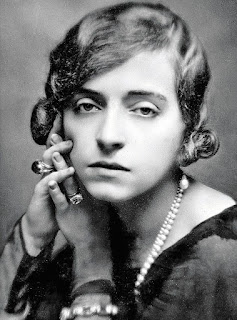