Catherine II (1729 – 1796), also known as Catherine the Great, born Princess Sophie of Anhalt-Zerbst. Empress of Russia from 1762 until 1796, the country's longest-ruling female leader. She came to power following a coup d'état when her husband, Peter III, was overthrown. Under her reign, Russia was revitalised; it grew larger and stronger, and was recognised as one of the great powers of Europe.
The period of Catherine the Great's rule, the Catherinian Era, is often considered the Golden Age of the Russian Empire and the Russian nobility. The Manifesto on Freedom of the Nobility, issued during the short reign of Peter III and confirmed by Catherine, freed Russian nobles from compulsory military or state service. Construction of many mansions of the nobility, in the classical style endorsed by the Empress, changed the face of the country. She enthusiastically supported the ideals of The Enlightenment and is often regarded as an enlightened despot. As a patron of the arts she presided over the age of the Russian Enlightenment, a period when the Smolny Institute, the first state-financed higher education institution for women in Europe, was established.
Mother of Paul I.
One of her favourites was Prince Grigory Potemkin.


- "... a woman of middle height, her glossy, chestnut-colored hair massed under the jeweled crown.…" https://erenow.com/biographies/catherinethegreat/45.html

- "All of them must have peered at the thirty-three-year-old woman in her prime, with her long auburn hair, her bright-blue eyes..." https://books.google.it/books… 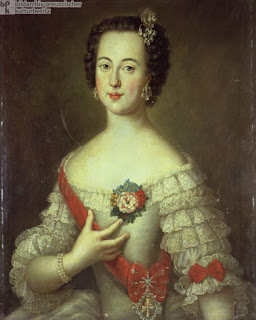