Vincenzo Ι Gonzaga (1562 – 1612). Ruler of the Duchy of Mantua and the Duchy of Montferrat from 1587 to 1612. He was the only son of Guglielmo X Gonzaga, Duke of Mantua, and Archduchess Eleanor of Austria. His maternal grandparents were Ferdinand I, Holy Roman Emperor, and Anna of Bohemia and Hungary.

His second wife was his first cousin Eleonora de' Medici, the daughter of Francesco I de' Medici and Joanna of Austria.

- "From the start it was clear that this blue-eyed, red-haired infant with attractive facial features and an exquisite bone structure was surprisingly healthy." https://books.google.it/books… 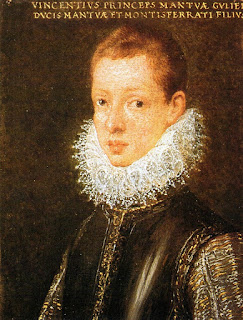