David Mackenzie Ogilvy CBE (1911 – 1999). Advertising tycoon, founder of Ogilvy & Mather and known as the father of advertising. Trained at the Gallup research organisation, he attributed the success of his campaigns to meticulous research into consumer habits.

- "Physically he was striking - tall and red-haired - and he dressed stylishly and smoked a pipe." https://books.google.it/books…

- "He was strikingly handsome. When he arrived in the U.S., the writer Ruth Gordon described him as “the tall young man with the flaming red hair”. Rosser Reeves said, “In those days, David looked just like Lord Byron." http://www.gandalf.it/m/ogilvy2.htm 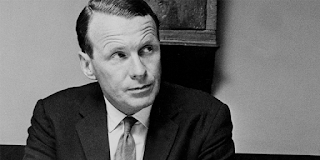