Fred Terry (1863 – 1933). English actor and theatrical manager. After establishing his reputation in London and in the provinces for a decade, he joined the company of Herbert Beerbohm Tree where he remained for four years, meeting his future wife, Julia Neilson. With Neilson, he played in London and on tour for 27 further years, becoming famous in sword and cape roles, such as the title role in The Scarlet Pimpernel.
Brother of Ellen Terry.

- "A large, imposing man with red curly hair, he was renowned for his dedication to the theatre, but also for his love of gambling at cards and on the horses." https://www.nytimes.com/…/ch…/gielgud-a-theatrical-life.html 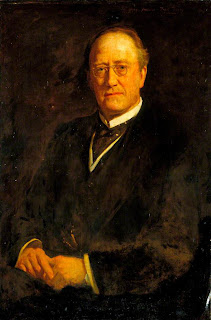