- "His hair was light, and his thickly-grown whiskers — much resembling those of the Marquis in shape — were of that doubtful hue called auburn by friendly tongues, and red by inimical." http://www.dandyism.net/2008/06/22/count-your-blessings/

- "He described him as 'a tall fellow of six feet three, built like a tower, with floods of dark auburn hair, with a beauty, with an adornment, unsurpassable on this planet." https://royalfavourites.blogspot.com/…/dandies-socialites-p… 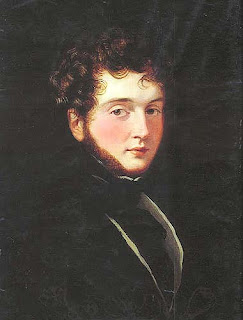