Marie de Rohan (Marie Aimée; 1600 – 1679). French courtier and political activist, famed for being the center of many of the intrigues of the first half of the 17th century in France. In various sources, she is often known simply as Madame de Chevreuse.
Friend and confidante of the queen, she was banished from court after an incident in which she had encouraged the pregnant queen in boisterous games in the corridors of the Louvre, resulting in a miscarriage. The duc de Chevreuse used all his influence to have her restored to court.
In her attempts to regain her lost position, she provoked or encouraged the conspiracies of the court, such as the Buckingham affair (1623–24) that compromised the Queen.
She was at the center of all the intrigues that involved foreign powers against France. She was involved in the conspiracy of the comte de Soissons (1641) and at the death of the king, a clause in the testament of succession forbade the return to France of the duchesse; a decision of the Parlement of Paris was required to break the will.
After the death of Richelieu, once again in France, she conspired at the center of the cabale des Importants led by Chateauneuf against Mazarin, in 1643; with the arrest and exile of César de Bourbon, duc de Vendôme, she fled once again. During the Fronde, she came closer to Mazarin for a time (1649–50), but then she switched back to the aristocratic party when the parliamentary Fronde and the aristocratic Fronde joined forces in 1651.
She died in retirement in the convent of Gagny (Seine-Saint-Denis département) in 1679.
Her youngest half brother was Francois de Rohan, Prince of Soubise, founder of the Soubise line of the House of Rohan. His wife was Anne de Rohan-Chabot, Madame de Soubise, who was one time mistress of Louis XIV.


- "Lively, sensual, with blue eyes and auburn hair, Marie de Rohan was one of the brightest ornaments at the court." https://royalfavourites.blogspot.com/…/french-sovereigns-lo… 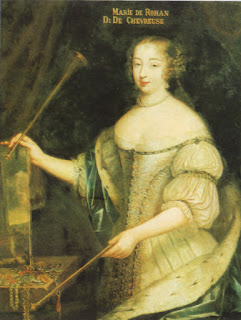