Charles Almerin Tinker (1838 - 1917). One of the nations's first telegraph operators assigned to an office in Illinois where he became good friends with a young lawyer who found himself fascinated by the new contraption and asked Tinker to show him how it worked. Later, that same lawyer, Abraham Lincoln, asked Tinker to serve as a cypher operator on the War Department's telegraph staff in the White House during the Civil War. Much of Charlie Tinker's detailed, personal diaries chronicle his years working in the telegraph office where Lincoln spent much of his day sending and receiving dispatches from the battle lines.


- "He retired in 1902. As per his passport application of 1903, he was 5’7½” tall with gray eyes, gray and auburn hair, light complexion, high forehead, not prominent nose, full and ruddy face with short-cut side whiskers, and square chin." https://www.green-wood.com/2013/lincolns-telegrapher/ 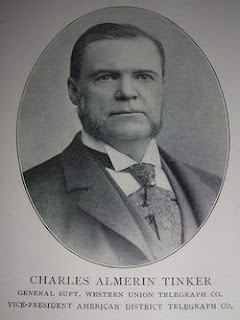